Select the right gate for your project.

Many a customers have said after their fence was installed, “I wish I would have gone with a …..gate instead.” American Fence Company of West Nebraska’s staff are professionals within the fence industry. As the professionals, we are obligated to point out the features, benefits and liabilities of each type of gate installation. On the surface, it may be obvious what is the best gate selection for your site until your gate is installed and you discover it does not open a full ninety degrees or slide up hill. Initially, we will look at swing gates for your residential projects in central Nebraska. Should you use a single versus a double?

Swing gates are the most widely used gates within our industry. These gates come in both single and doubles. Why use a double versus a single? The obvious answer may be the size of the opening. That would not be necessarily correct. The selection of a single versus double has more to do with the following:

1. The slope that runs parallel to the fence line or gate opening. If there is too much slope that a single gate hung plumb while closed will have a gap of the bottom of the gate that is greater than six inches at one end; a double gate should be considered to divide that gap between the two leaves.

2. The swing of the gate and slope that runs perpendicular to the fence line or gate opening. If a single gate when swung open bottoms-out against a rising slope; (this situation commonly occurs in Kearney Nebraska) a double gate should be considered to hopefully prevent the gate from bottoming-out. A double swing gate will have two leaves that will be half as long as a single leaf that fills the opening.

It must be said here that rarely do we recommend a drive gate that swings out into the outside, public side, of the fence. In general, when you swing a drive gate out; you may cause those outside the gate to back-up to allow for the gate to open. This may cause them to back-up into traffic. Imagine a driver that is sitting at the entrance of a gated community. Behind him is a busy perpendicular thoroughfare with speeding traffic. The gate begins to open out toward the driver. The driver panics and puts his car into reverse. Paying more attention to the on-coming gate, the driver fails to recognize the on-coming traffic he has now backed-into. Crash!

3. The storage of the gate. If a single gate results in storing the gate into a drive lane or parking stall; a double swing gate will only take up half as much storage space.

On the surface, it may appear that a double drive gate is always a safer install. It may appear so but we believe a single gate is a much safer and reliable installation. A single gate is secured, locked, to a positive immovable latch post whereas a double drive swing gate is secured at the end of the two panels where these meet in the middle. A double drive swing gate uses a drop rod assembly that is installed between the two leaves and pins the gate leaves to the ground. This is not as secure as a single swing gate that uses a latch post set into a concrete footing.

When does the opening get to be too large for a single gate leaf? All of the above aside, it would take a very wide opening to not consider a single leaf. American Fence Company has successfully built sixty foot plus single swing gate leaves. 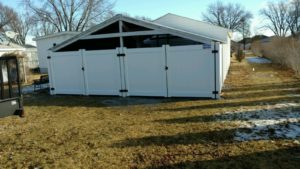